The Quartz currently controls a lighting rig encompassing 65 fixtures, not including the church’s house lights or haze generator. Thirty-nine of these are a combination of LED profile and mover fixtures mounted to pipes over the floor for front lighting, while 26 are either on the stage for uplighting or mounted on pipes flown over the stage.

Worship Pastor Jason Dominey, who has been at the church since 2004, points out that the compact Avolites console was chosen for numerous reasons. “We needed a lighting control system that would best complement and support what we were doing on Sundays, and Andrew Fisher at Bandit highly recommended the Quartz for us,” he says. “We wanted to make sure that we could hire programmers who could help us with lighting designs for some of our services and special events, and it was easy to find lighting pros who were willing and excited to use an Avolites desk. Also, we predominantly use volunteers at our church and Avolites seemed to me to be the most user-friendly of all the controllers we were considering. Ease of programming and volunteer friendliness, in particular, were two things that really appealed to us about the Quartz.” 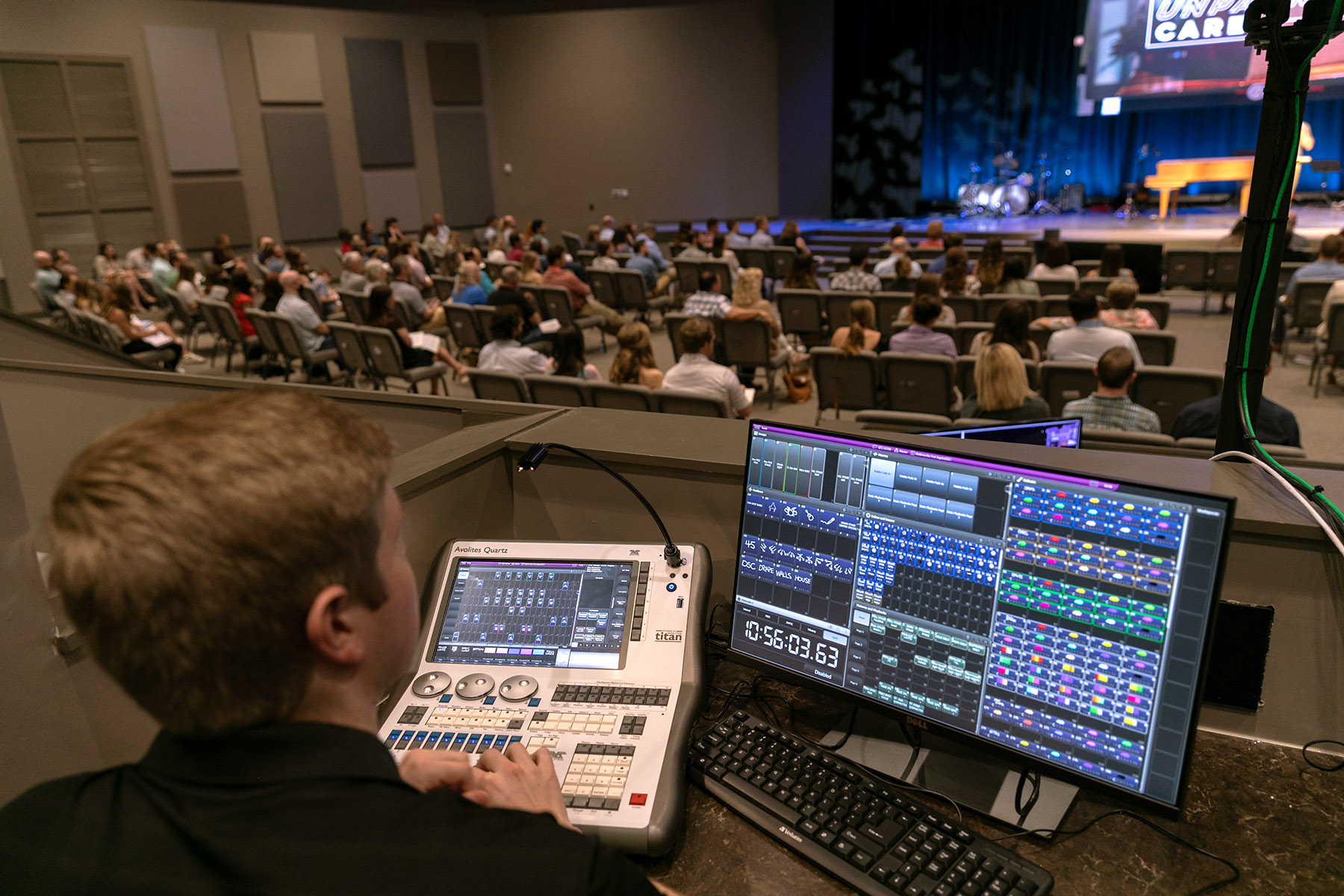 Production Director Matt Hellems concurs that the console was the right choice for the church’s layperson crew. “The Quartz has provided a really great workflow for our volunteers so far,” he says. “I can come in during the week and program all the looks we will need for a particular weekend, then the volunteers can very easily execute these looks during a service via the Playbacks layout located on our external touchscreen. Having all playbacks on that touchscreen makes it much less daunting for a volunteer who may be intimidated by a physical console.”

Although Hellems was largely unfamiliar with the Avolites platform prior to adopting the new console, he notes that the learning curve has been painless. “I’m very familiar with programming on several other lighting brands’ systems, but the Avo system was relatively new to me,” he shares. “That being said, I’ve been able to very quickly figure out the particulars of the Titan software workflow, and programming on the Quartz has been a breeze. It has provided us with very smooth and consistent looks from element to element during our services and removed many distractions that can be caused by less-than-ideal lighting transitions. We recently held a concert here, and I took the opportunity to program specific cues for each song, which really helped elevate the event and make it feel special and different from a typical Sunday service.”

The team at Watkinsville First Baptist was so pleased with its Quartz console that the church even more recently also purchased an Avolites T1 USB-to-DMX interface for its student center, which supports middle- and high-school services, as well as many weekly outside events.

“Our new T1 runs Titan software on a touchscreen PC that we’ve set up to mimic our exact layout from the Quartz in the main worship center,” Hellems describes. “There are less movers and less fixtures in the student center, but the results have been the same. I’ve been able to program quality looks and transitions and save them right to the Playback pages where they can be recalled very easily by any level of operator. From production volunteers to youth staff who have no technical background, everyone finds the process and layout extremely easy to work with.”

“The Quartz and T1 have been great additions to both our worship and student centers,” Dominey adds. “Andrew and the Bandit team helped make the transition easy for us, and we are very happy with our purchases. We would encourage other churches that are mostly volunteer-based to take a serious look at what an Avolites setup can do for them as well.”